The SEPLAA Foundation launched its first children’s project the SEPLAA Young Leaders’ Club, the First International Forum run by children for children in Pakistan today in Lahore. The official website www.seplaayoungleadersclub.org was also launched the same day.  Children aged 7-10 were invited to the launch with their parents.

The children took part in art activities and were later introduced to the club by Amal Farooq Malik, the Founder of the SEPLAA YLC. Later they were shown the website and were told about the ‘Children’s Voice’ Blog on the website where the children’s articles, stories and art work about Pakistan and its social issues will be posted for the world to see. 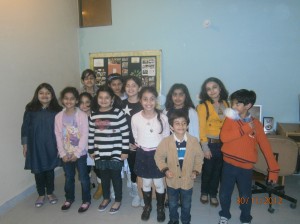 The SEPLAA YLC wants our children to become young leaders to bridge cultural differences through their online community platform and become friends for a better tomorrow.

Membership is open at the Club and the Founders are already forging partnerships with the Office of Ombudsman Punjab’s Children Complaint Office, under privileged children in schools in Lahore and  Kasur to promote their community work in the areas empowerment, education and peace in Pakistan.